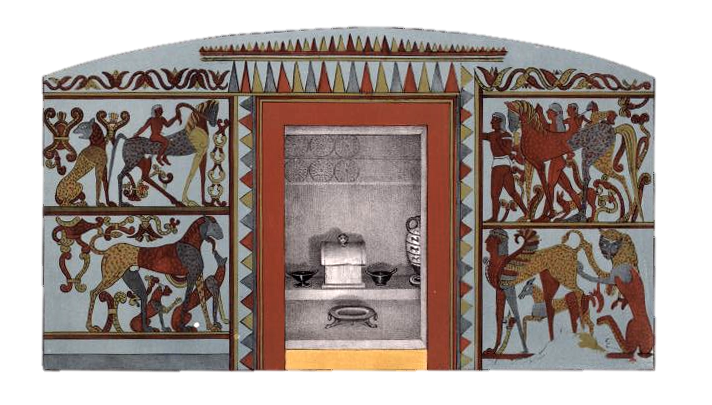 Etruscan cemeteries contain the largest surviving group of ancient Mediterranean paintings before the Roman era. Beginning around 690 B.C., subterranean tombs were a canvas for depicting hunts, banquets, athletic contests, and mythological monsters. To create murals on the walls of temples, artists fired terracotta plaques decorated with clay and mineral pigments. This lecture surveys the art and science of wall painting at Cerveteri, Tarquinia, and other Etruscan sites. Technical studies of a remarkable new set of paintings reveal the innovations of Etruscan artistic workshops.

Claire Lyons is Curator of Antiquies with the J. Paul Getty Museum. Since joining the Museum in 2008, she has curated the exhibitions Grecian Taste and Roman Spirit: The Society of Dilettanti (2008); The Aztec Pantheon and Art of Empire (2010); Lion Attacking a Horse from the Capitoline Museums, Rome (2012-13); and Sicily: Art and Invention between Greece and Rome (2013). Her research centers on pre-Roman Italy and antiquities collecting in the modern era. She has co-edited The Archaeology of Colonialism (2002); Antiquity & Photography: Early Views of Ancient Mediterranean Sites (2005); and Altera Roma: Art and Empire from Mérida to Mexico (2016). Claire completed a Ph.D. in classical archaeology at Bryn Mawr College and has excavated at Murlo, Corinth, Metaponto, and Morgantina.

2. Walk east into campus from Lot 22 (about five minute walk).

3. The Arts Building will be on your right. Look for a large geometric sculpture sitting in a field of gravel.

4. Turn right across the bike path, keeping the sculpture on your left, and walk into the Arts building.