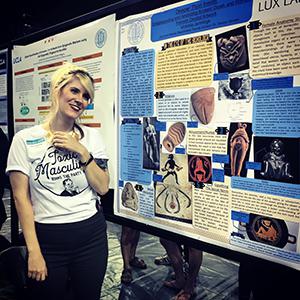 Victoria Jennings is a first year Ph.D. student in History of Art & Architecture (third year in the department having completed her M.A. in June 2020) with her current work in Ancient Greek and Roman artwork. Her M.A. thesis focused on the Ancient Greek mythological character Baubo. Baubo, a female figure from antiquity, has unique visual representation in objects found across the Mediterranean and within the thesis they were visually analyzed and culturally explored through lenses of magic, witchcraft, religion, and female and communal identity. Moving forward, Victoria plans on further exploring magic and witchcraft in Roman antiquity with a keen focus on female driven cults and identity through visual representations. Along those lines she also plans on devoting further studies to the practice of ancient tattooing within the Mediterranean and further.

Victoria is a current recipient of the Margaret Mallory Fellowship and has previously received the Eugene Wurzel Award for Scholastic Excellence. She holds a M.A. (UCSB 2020) done under the guidance of Claudia Moser and a committee that included Alicia Boswell (HAA, UCSB) and Elizabeth DePalma Digeser (History, UCSB). She holds a B.A. (UCLA 2017) done along with the completion of an honors thesis under the guidance of Sharon Gerstel. She has worked at both the Fowler Museum at UCLA and UCLA's Design Media Arts Department, volunteered in the Decorative Arts and Sculpture Conservation Lab at the Getty Museum, participated in UCLA's Undergraduate Research Week, and held an internship at private conservation studios in Hollywood. She has also lived, worked, and studied for extended periods in Florence and Milan.